Home » Featured » Who is Kelsie Ahbe? 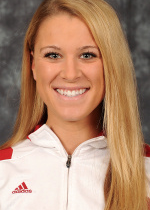 Who is Kelsie Ahbe?

There had been rumors of a 4.40m girl going to school in the states that was holding Canadian Citizenship and interested in competing for Canada. The rumors are true. Kelsie Ahbe has just recently been given clearance by the IAAF to call Canada home. Kelsie has taken the time to provide a very detailed bio that I have included so we can all get to know our current ranking leader and # 8 on the alltime womens rankings a little better.  Kelsie has started her first post colligate season strongly with two consecutive 4.40m results.  Welcome to Canada Kelsie we are happy to have you join our small but enthusiastic pole vault family!

Living History/Connection to Canada: Born July 6, 1991 in the U.S. in Akron, Ohio and grew up there with my three younger siblings, Bradley, Austin, and Lindsey and parents, Brad and Susie Ahbe. My dad is from Toronto, Ontario and moved to Akron for a job, which is where he met my mom; she is from the Akron area.

I have numerous family members residing in Toronto, including my grandmother, aunt & uncle, and cousins. I have lived with my grandma in-between semesters of college and helped my aunt and uncle develop an eating disorder clinic in Toronto (something I am very proud to be a part of). My extended family loves to spend time in Muskoka at Rocky Crest and at my family’s cottage on Lake Joe. My favorite place in the world! I am excited for the opportunity to represent Team Canada because I am very proud of my Canadian roots!

Vault History: I was a multisport athlete growing up and I thrived on the competitive nature of sport. I played almost every sport as a kid— gymnastics, soccer, basketball, volleyball, softball, and swimming. Gymnastics was really my niche and I had dreams of competing in the NCAA. In high school, I started running track, while also competing in gymnastics, swimming, and soccer.

I was recruited to vault in the NCAA and chose to attend Indiana University on an athletic scholarship. I was drawn to IU because of the strong academic programs and high level of success taking place in the vault. I received my undergraduate degree in Public Health. Because I took five years of eligibility, I was also able to obtain my Masters in Public Health Administration. My yearly progression in the vault was as follows: 4.05, 4.30, 4.25, 4.25 (redshirt year), 4.40. As you can see, I hit a plateau for a few years. This was challenging and frustrating to work through but I had a great support system of coaches and teammates to keep me positive and hopeful that I would break through it.

-Division I Academic All-American 2014 (same as above)

Competitive Goals: I definitely have big picture goals such as representing Canada at the Olympic Games & working my way to the podium. But more importantly, I have to focus on my daily goals because over time these little things add up and have a big influence on my ability to jump higher (thus reaching my big picture goals). Daily goals include: following and trusting the training plan set forth by my coach, adhering to my nutrition and recovery plan, watching more video so I can really learn more about the vault, and most importantly is working on the mental component of the vault. Mentally, I have to first gain an understanding of specific vaulting technique, then I have to be able to visualize myself doing things correctly, and then I need to be able to execute technique in practice and competition. This takes extreme mental focus and toughness because many times we are working toward big changes. I also hope that as a competitor, I can encourage and inspire the people I come into contact with.

Life Goals:My family is very important to me, so God willing, I would love to have a family of my own later in life. I have many interests so it will be exciting to see what career opportunities arise… I love working with people and helping them reach their goals. I already “coach” some of my friends to help them reach their health and wellness goals. I would love if I could make a career of it one day. I love encouraging others and celebrating their progress and accomplishments! Another thing I really enjoy is interviewing fellow athletes. While at University, a teammate and myself began a show called “Outside the Lanes” where we interviewed our teammates and coaches on a variety of topics. If you follow my social media, you might see a spin off called “Off the Runway.” No promises… it is a silly and fun idea, but I love hearing other people’s stories, so we will see what comes of it! (twitter & instagram @ahbevaulting)

Life at TMPVA and adjusting after life at Indiana
After finishing my NCAA eligibility, my coach at IU encouraged me to seek out training opportunities that would give me the best opportunity for success at the next level. I felt confident that the best place for me to be was Knoxville, Tennessee training with Coach Tim Mack. Tim was the 2004 Olympic Gold Medalist and he is also coaching elite vaulters, Mark Hollis and Melissa Gergel. Much like when I decided to go to Indiana University, I knew I wanted to be somewhere I was not necessarily the best vaulter and would be pushed and challenged by my training partners on a daily basis! Even though Mark and Melissa are both American, they have been extremely encouraging and helpful mentors and friends… I think this situation really showcases the beauty of sport, where different people can come together with respect for one another and for the pursuit of a common goal.

I will say the post-collegiate vaulting world is still quite foreign to me. At University, I was so spoiled because the coaching staff took care of everything and any equipment needed was readily available. Resources are limited at the next level and now I have to manage things for myself… enter meets, arrange travel, pay for travel & hotel, and pay for equipment. I finally purchased by own vaulting poles for the first time this year! There also comes the challenge of finding part-time work that aligns with my training schedule… because at the end of the day, I really want to make training my priority so I have the best chance at success. I did get really lucky because when I moved to Knoxville, I was able to move in with family friends who have been an amazing support system for me and have really helped me get my feet on the ground here. I also feel very thankful for the guidance of my new coach and training partners.

Pole Info:
I’ve only ever used UCS Spirit Poles and I am very happy with them! My personal best jump was made on a 14’ 165 and I was gripping right beneath the label at the top. I’m making the transition to 14’7 poles (155s) and this is a new and exciting challenge!

Meaningful Vault Events & Development
My development happened slowly over time thanks to the people around me. All I really did was trust the plan set before me and make the most of every opportunity I had. I owe a lot to my older teammates who set a good example for me and encouraged me along the way (especially Vera Schmitz, formerly Neuenswander). I am very thankful that God placed special people in my life who have given me the confidence to dream big dreams!!

My favorite meets were always Big Tens and NCAAs because there was so much at stake. My final year at Indiana, the 2014 Outdoor NCAA meet was especially meaningful because it marked the end of my time at IU. I ended with a personal best to place second, in a piping headwind. I also had a younger teammate that performed really well and made the podium. It felt great to compete as a team and I felt really appreciative of all of the time and energy my coach, Jake Wiseman, invested in me over a five-year period. I am already making new memories and look forward to more exciting performances in the future!